Like real estate, a Gothic novel is all about location, location, location.  Whether it be a Southern Manse, a moldering European castle or a gloomy family estate – success ultimately depends on the setting.  Once an author gets that right everything else is up for grabs.  Hero or heroine? Truly horrid or amusingly satirical? Supernatural explanations or Scooby Doo ending?  No one cares as long as there’s at least one secret passageway.

Published in France in 1938, Julien Gracq’s Château D’Argol was influenced by the late German Romantics (taking as one of its themes the idea that genius is supernatural and unable to exist within societal norms) and the work of Andre Breton (to whom the novel was dedicated).  Albert is a wealthy, indolent and arrogant young man – an intellectual who espouses the philosophies of Hegel – who has purchased an isolated medieval castle on the coastline of Brittany.  A huge estate surrounded by a dark forest and near the water – Albert spends the beginning of the novella exploring it while he awaits the arrival of his best friend, Herminien.

Herminien, when he arrives, brings with him a beautiful young woman named Heide. Somewhat predictably a love triangle forms between the three. Heide, though, is not the apex of this triangle. Despite a promising start, where she intellectually holds her own with the two friends, she quickly assumes the role of an object to be passed between them. Each man using her as a kind of surrogate for the other.  Theirs is the true relationship driving the plot of Château D’Argol. Albert, particularly, is obsessed by his cynical and jaded friend.  His interest in Heide no more than an extension of that obsession. Herminian’s motives are harder to place. Heide is one in a long line of lovers – all of whom (according to Albert) are eventually treated cruelly and ridiculed.  How Herminian views Albert – the my impression is that Herminian does not possess Albert’s wealth or resources, making his motivations predatory.  The result is a dark, disturbing and violent tale.

The nature of the violence obfuscated by the flowery, antiquated language of the prose (reminiscent of William Morris’ work).* Château D’Argol features almost no dialogue.  Instead, metaphors saturate Gracq’s writing – descriptions of the landscape providing insight into the characters’ psyches.  His repeated reliance on metaphor to create tension can (particularly in today’s world of pared down prose) feel overdone.  And yet, in the context of a gothic tale – it works. The metaphors thicken the prose, imbuing it with menace, building layers of foreshadowing.  Nature is a harbinger.  The paragraph below eventually ends with Albert receiving news of Herminian’s & Heide’s imminent arrival.

The storm was raging over Storrvan.  Heavy clouds with jagged edges rushed out of the west, almost brushing against the tower, and at moments enveloping it in streamers of vertiginous white mist.  But the wind, above all the wind-filled space with its unbridled and appalling power.  Night had almost fallen.  The tempest, passing as though through a head of fragile hair, opened quick fugitive furrows through the masses of grey trees, parting them like blades of grass, and for the space of a second one could see the bare soil,black rocks, the narrow fissures of the ravines.  Madly the storm twisted this grey mane! Out of it came an immense rustling; the trunks of the trees, before hidden by the frothing leaves, were bared now by the wind’s furious blasts; one could see their frail grey limbs as taught as ship’s rigging. And they yielded, they yielded – a dry crackling was the prelude to the fall, then suddenly a thousand cracklings could be heard, a cascade of resounding noises drowned by the howling of the storm, and the giants were engulfed. Now the shower let loose the icy chill of its deluge like the brutal volley of handfuls of pebbles, and the forest answered with the metallic reverberation of its myriad leaves. Bare rocks glinted like ominous cuirasses, the liquid yellowish splendour of the wet fog crowned for an instant the crest of each forest tree, for an instant a yellow and luminous and marvellously translucid band shone along the horizon against which every branch stood silhouetted, and made the drenched stones of the parapet, Albert’s blond hair soaked by the rain, the cold wet fog rolling around the tops of the trees, shine with a golden gleam, icy and almost inhuman – then went out and night fell like the blow of an axe.

The elaborate style and tangled symbolism is more suited to a 19th century author than to one writing in the 2oth.  Gracq’s American contemporaries – Hemingway, Fitzgerald & Faulkner – had all published their modernist masterpieces a decade before.**  Joyce’s Finnegans Wake would be released a year later in 1939.  Even to readers in 1938, Château D’Argol must have seemed of another age. 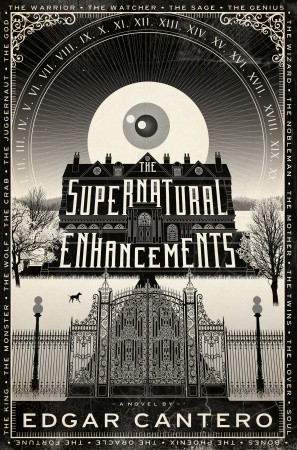 The Supernatural Enhancements also can be categorized as a gothic novel.  One updated to more suit our modern world.  Think Gothic Fusion. Edgar Cantero is  a Catalan author who writes in three languages: Spanish, Catalan & English. For this book he chose English and borrows from the idea of the Gothic novel only to quickly abandon it in favor of a DaVinci Code style puzzler.

The initial premise/setting is similar to Château D’Argol in that a young man, referred to only as A., finds himself in possession of a rambling estate.  A’s house is located in Virginia, left to him by a distant relative he’s never met.  He and his companion/love interest: a punk rock, teenage girl who happens to be mute (I feel as if there should be a more eloquent way to write that, but there you are) travel from Europe to America.  They arrive and  discover that A.’s relative died under sinister circumstances – by jumping out his third story bedroom window.  More distressing is the revelation that this particular mode of suicide runs in the family. The deceased relative’s father also committed suicide in the same way, from the same window… as may have his grandfather (I’m a bit fuzzy on the geneology). Regardless, our two protagonists soon discover that their new home is the meeting place for a secret society.  And that a ghost lurks in one of the bathrooms.  And that a general curse seems to hang over the place.  And if you think I just gave everything away, you couldn’t be more wrong.

The narrative is told through letters, journal entries, video recordings and interviews.  Every time you think Cantero has run out of plot twists another one appears.   Not always to the good.  The Supernatural Enhancements is entertaining at a very superficial level.  Cantero introduces so many characters, ideas and strange digressions (the book is a veritable encyclopedia on how to break a code) that when it comes time to wrap up the actual mysteries it feels very hastily done.  I half expect there to be a sequel (which I doubt I will read).

The Supernatural Enhancements did make me wonder: what would a true 21st century gothic novel look like?  Val McDermid’s redux of Northanger Abbey?  Anne Rice’s  The Witching Hour (a good, stand-alone book though I found the other two parts of the trilogy unreadable) and  Carlos Ruiz Zafon’s The Shadow of the Wind trilogy occurred tome, but are out of the running if only because of the periods they are set in.  There needs to be technology included in the plot in a meaningful way and more of a sense of a global world – something Edgar Cantero attempts to incorporate into The Supernatural Enhancements but which is overwhelmed by minutiae.  Or is the contemporary gothic novel already here?  The purview of the Sci-Fi / Fantasy author?

What do you think, readers – Have you read any good gothic novels lately?

*Gracq  referred to Chateau D’Argol as a “demonic” retelling of Percifal.  The Grail Legend was a favorite among the Pre-Raphaelites who surrounded Morris.   Not to mention influential in Morris’ own writing – particularly his classic fantasy novel The Wood Beyond the World.

This Bottega Veneta tote simultaneously telegraphs "I Am Literary!" and "No book from the Strand will EVER see the inside of this bag." Genius. @#Bookstagram #totebag
When Women Kill: Four Crimes Retold by Alia Trabucco Zerán, translated by Sophie Hughes. Not entirely sure I buy into the premise -- that these women are victims "lashing out" against gender norms whose crimes have been reframed to fit a patriarchal narrative (come up for air!). But I have about 50 pages remaining, by which to be convinced. #womenintranslation #feminist #bookstagram #readtheworld #chileanliterature #chile🇨🇱
Bookmarks.
I am BATMAN!!! 🦇🦇🦇 (actually, his name is Ralph).❤❤❤
This cover.
Furoshiki book covers 🤯 #bookstagram #reading📖