There was once a farmer, and he had two sons…

One day a prince lost his way in the woods…

A farmer had three sons…

Three young men, a tailor, a miller, and a soldier, found themselves lost in the woods one day…

A nobleman had three daughters, each more beautiful than the next… 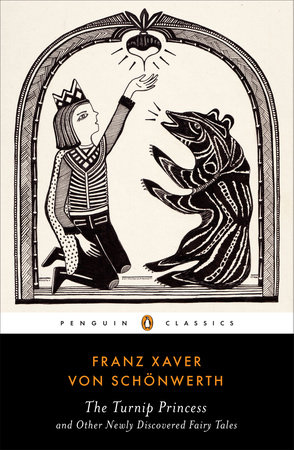 This is how fairy tales begin. Not with “once upon a time”, but with individuals standing on an empty stage patiently waiting to be told what to do next. Because fairy tales are essentially about the completion of tasks, even when the hero or heroine has no idea what that might lead to.  The underlying moral of most fairy tales is – do as you’re told and good things will follow.

Franz Xaver Von Schönwerth was a contemporary of the Brothers Grimm.  Like them he collected folk tales, employing a scientific method and focusing on a specific region of Bavaria known as the Upper Palatinate. He used questionnaires and carefully recorded the dialect, customs and costumes of the people he interviewed.  His work was much admired during his lifetime, but seems to have disappeared after his death. Until 2009 when Erika Eichenseer (a Bavarian author, storyteller & poet) discovered 500 unpublished works in a Bavarian archive.

The Turnip Princess and Other Newly Discovered Fairy Tales translates 72 of these newly discovered stories into English. The book divides them into six categories: Tales of Magic and Romance, Enchanted Animals, Otherworldly Creatures, Legends, Tall Tales and Anecdotes and Tales About Nature.  And they are quite unlike anything you might have encountered in the past.  Yes, there are some familiar themes – such as dancing princesses, a miniature child (“the size of a thumb”) and enchanted toads.  But in Von Schönwerth’s versions the Prince is often the one who needs saving; soldiers carry guns, not swords; the toad is just as likely to be a Princess and even after the hero saves the day he doesn’t always get the girl.

What you realize as you read is how spare, fragmentary and contradictory these tales actually are.  The Three-Legged Goats (found in Part 2: Enchanted Animals) begins –

“Three young men, a tailor, a miller, and a soldier, found themselves lost in the woods one day. It was growing dark, and they still could not find a way out.  The tailor decided to climb to the top of a tree, and from there he could see a light in the distance. He started walking in that direction, without saying a word to his companions, until he reached a castle. The first room he entered had nothing in it but three-legged goats and cats. Some of the cats were playing the fiddle on the tables and benches; others were dancing to the tunes. The tailor was hungry, so he ate some food. Once he was done, he stuffed his pockets with good things to eat and went back to give some food to his companions. After the tailor returned, the miller also climbed the tree, saw the light, found the castle, and discovered everything the tailor had found.”

At this point the soldier follows in the footsteps of his two companions and the tailor and miller disappear – never to be mentioned again. The story goes on to tell how the soldier breaks the enchantment on the castle, marries the princess and then journeys home to tell his parents the good news.  And where traditional fairy tales might end, this one is just getting started:  his wife, discovering he is poor, spurns him.  She disappears and the soldier is forced to search for her. While searching he encounters three thieves, from whom he steals three magical items.  He uses these three items to find his princess and win her back. And even after all he has done the Princess still questions her father, the King, as to whether she should keep the soldier as her husband.  “What should I do? Should I choose a new broom or take back the old one?”

The Three-Legged Goats, like many of the stories in this collection, appears to be a compilation of several fairy tales into one. Which makes sense when you consider that Von Schönwerth’s purpose when setting down these tales  was to faithfully record the oral history of those he interviewed.  These stories were transcribed in the telling  – not copied from books.  They changed and evolved over time.  And so it’s not implausible that two or three may have eventually merged together and been condensed into one.  Or that a story which began one way would end in another.  This results in very different narratives than most of us are accustomed to.

Maria Tatar makes some interesting choices in her translation.  Three soldiers, we are told, have “finished their tour of duty”.  When a huntsman asks three giants if they are planning to free a princess, the giants growl “From her wealth, anyhow.”  There are more guns mentioned than I remember in The Brothers Grimm.  Von Schönwerth lived from 1810-1886, so the modernity of the language and references is not entirely misplaced.  But it is definitely unexpected and at times jarring – which might have more to do with my expectations of what a fairy tale is than the quality of the translation.

Hans Christian Anderson, Charles Perrault, Andrew Lang (of the Blue, Red & Green Fairybooks, etc.) and Walk Disney have – for better or worse – shaped most of our expectations of what a fairy tale should be.  It is easy to forget that folk tales are just another form of folk art – and that folk art is primitive by definition.  The stories in The Turnip Princess range from one to five pages in length, which doesn’t leave a lot of room for embellishment. But it is the stripped-down, primitive nature – the potential in these stories of what they can become – which makes this collection so exciting.  Consider the literary impact of Cinderella, Beauty & the Beast, Red Riding Hood and Hansel & Gretel.  The plots & characters have become archetypal.  Their influence can be detected (whether overt or subtle) in many contemporary works of fiction. What, then, might a new generation of writers make of Franz Xaver Von Schönwerth’s stories?  Of a girl who becomes a snake when her stepmother casts her into a lake? Or a Prince who is kidnapped by a mermaid? Or a beautiful maiden freed from a turnip? Erika Eichenseer’s discovery has created new possibilities… new opportunities.

More from Matisse in the 1930s @philamuseum #matisse #philaelphiamuseumofart #paintings (The colors here are not even close to the vibrancy of the originals).
Caught the last weekend of Matisse in the 1930s @philamuseum - illustrated book #matisse #philadelphiamuseumofart #bookstagram
All of humanity...
This Bottega Veneta tote simultaneously telegraphs "I Am Literary!" and "No book from the Strand will EVER see the inside of this bag." Genius. @#Bookstagram #totebag
When Women Kill: Four Crimes Retold by Alia Trabucco Zerán, translated by Sophie Hughes. Not entirely sure I buy into the premise -- that these women are victims "lashing out" against gender norms whose crimes have been reframed to fit a patriarchal narrative (come up for air!). But I have about 50 pages remaining, by which to be convinced. #womenintranslation #feminist #bookstagram #readtheworld #chileanliterature #chile🇨🇱
Bookmarks.